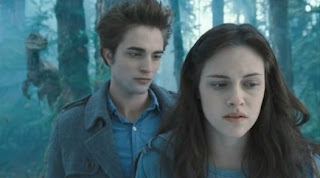 Even better if the pizza is fucking hillarious.

So it's about these people, Bella and Edward. They are both really annoying characters, both in the film and in the books. In the film they are pretty much the only characters, in the books they have a little bit more depth and there's more room for other, more interesting people.

I don't really think the books are as hillarious, it's mostly the film, and almost only because of Robert Pattinson (Edward) and Jackson Rathbone (Jasper). They have the same acting technique: dont breathe, look like you're almost about to shit yourself (or just did) and stare "intensely" at people. They both (just like all the other vampires) wear a lot of makeup as well. And they both have huge hair! Wonderful! Half of all the scenes with Edward his hair doesn't fit into the picture at all and he looks like Johnny Bravo. I almost suspect he might have based his whole character interpretation on Johnny Bravo.

I wish I could find the article with the interview where he said that the books where pretty obviously Stephanie Meyer's own fantasies and that he couldn't stand the character Edward and therefore played his as stiffly as he thought the character deserved. And also that the crazed fangirls made him stop washing his hair to try to get rid of them. Didn't work. Can't find it though, due to Twilight fans grabbing the internet and putting their every though on there. Their every thought is about Edward. Or Robert. They can't seem to keep them apart.

Anyways! My first link to you this evening, dear readers, is that of Buffy vs. Edward! This is a great little video, and it gives you a good look at the mentioned acting technique. 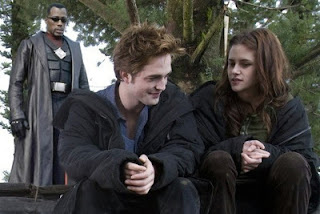 The second one is probably most funny for those who have read the book. This very exactly describes my own, personal picture of Edward and his personality - Growing Up Cullen. This seems to have become a phenomenon, which - to me - proves that there are a lot of fans out there who actually have humor, and probably the same view of the books as I do.

("I JUST TO WANT TO SCRAPBOOK TONIGHT, OK")

(Oh by the way, this is where the famous line "SHE SMELLED DELICIOUS. LIKE BACON." comes from as well. Edward is such a little bitch.) 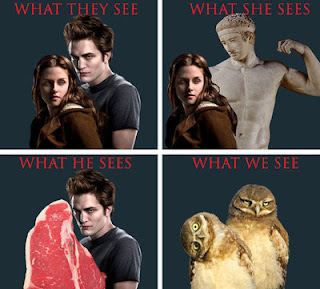 Anyway, next in line is this hillarious Cracked-article wich explains all the books very good for anyone who does not want to read them but who wants to know what all the fuss is about, or for people like me, who read the books, and think of them as the hillarious pizza of literature.

("If a guy dumps you and says he doesn't love you anymore, he doesn't mean it. All you have to do is beg and destroy your life to prove that you really love him, and he'll come right back and love you even more!" - We all know this to be true. Also, uhm, yeah, spoilers. If you didn't guess.)

Last of all I'm going to tell you a secret - I actually respect Robert Pattinson. Because holy carp the man can sing. (Try not to look too much at the "video". And try not to listen to closely to the lyrics - or read them in the info. It's a beautful song, really. It's also in the film, in the restaurant scene.)

That's just about all for tonight. I'll round off with my favourite characters in the book - Emmet and Jacob (omygawd I know right, so wierd) and absolutely best looking man in the film - Gil Birmigham (as Billy Black, Jacob's wheel chair-bound father.) Wow! Totally hot! (Yes, I like men who are not eternal seventeen-year-old virgins, thank you very much.)

Note - Pictures are from Moronail.net!

Listening to: My totally Twilight-unrelated spotify playlist of course. Lot of Tom Waits in there right now.
Love, Kristina at 23:58