So I've been twittering a lot, instead of blogging, since I haven't had much to say that needed the use of more than 140 characters. I like Twitter. It's fun, and it's a brilliant idea.
In other news I really want a pair of Ray-Bans. (Yes the video is thuroughly disturbing but as eighties songs go the song is alright. Well, if you ignore the lyrics that don't really make sence,unless Corey Hart is insane. Still, he has very cool sunglasses. And pretty cool red shoes too. And the girl that for some reason sits in a corridor stamping paper like her life depended on it has very cool sunglasses as well, and a cute hairstyle!) 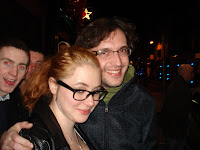 Me and a random spanish dude switched glasses late at night outside a pub.

Last night I went down to Shelbourne for a while after first going home and having chinese and painting. Today I'm going to go down to the city to buy some coloured paper and a pyjama top. And tonigt I'm probably gonna go for a beer or so with Eva and then head over to Ida's for some hanging out wit her, Liz and Karolin.
Best thing right now is that I'm painting a lot and it makes me happy. I forget about everything in the whole world and time flyes by and its great. Just wish canvas was cheaper.
Listening to: Sixteen Horsepower - La Robe A Parasol (it's in french!)
Love, Kristina at 12:40